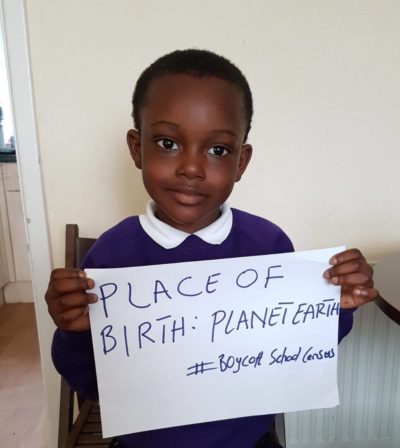 On Monday 20th November, Universal Children’s Day, Against Borders for Children (ABC) launched a crowdfund to raise a legal challenge against the Department for Education (DfE) on the legality of gathering nationality and country of birth data on children in England.

You can pledge your support for the crowdfunding campaign on Crowd Justice, a public interest crowdfunding platform.

The nationality data, gathered on children as young as six through the School Census since October 2016, is not being collected for any educational purpose. The DfE originally planned to hand over pupils’ nationality data to the Home Office as part of the Prime Minister’s migrant focused “hostile environment” agenda until public outcry led by our campaign prevented it from doing so.

This UK Government policy has been condemned by the House of Lords, and by numerous organisations, including the National Union of Teachers, Privacy International, the Refugee Council, and the human rights organisation Liberty which represents ABC in this legal challenge.

Fran Zanatta, (spokesperson for Against Borders for Children), said:

“If you care about the rights of children to be educated in an environment free of the threat of deportation, in line with the UN Convention on the Rights of the Child, join us.

If you want to push back on the anti-migrant sentiment and policies that have dogged this country for years, please chip in to our crowdfunder. ABC is a grassroots campaign group with less than £1000 and needs your solidarity in bringing this challenge.”

“All too often people feel powerless when faced with this kind of racist policy-making, and the atmosphere of division and fear it generates, but the truth is we can fight it.

Theresa May’s legacy at the Home Office includes making schools ask only those children assumed to be migrants to bring in passports and birth certificates – it’s utterly unacceptable.

Sooner or later we need to turn the tide and start to turn a hostile environment for our children into a welcoming one. I would urge everyone who can spare even a little money to support this vital challenge.”