Today, Monday 16th January, every headteacher of primary and secondary schools and academies in England will have received an unprecedented e-mail jointly signed by Against Borders for Children (ABC) and human rights organisation Liberty.

We have asked headteachers to ensure all parents are informed of their right to either refuse the new nationality questions in the upcoming Spring School Census this week, on Thursday 19th January or retract data already collected in the Autumn School Census. The new census data was recently described in a House of Lords debate as having “all the hallmarks of racism”.

As campaigners we have also highlighted that the nationality data collection is explicitly linked to Home Office policy to reduce immigration. A Memorandum of Understanding (MoU) released in December also allows the Department for Education (DfE) to share the personal details of up to 1500 pupils with Home Office every month for immigration enforcement purposes.

This unusual step of human rights organisations contacting every school in England follows the recent revelation that the nationality data questions were added as a watered down compromise in July 2015. Theresa May as the then Home Secretary initially planned for schools to check passports of children before enrolling them and withdrawing offers if parents were found to be living in the UK without the right to remain.

Since this policy has come into force, some schools have asked only non-white pupils to prove their nationality, also others to bring in their passports. Campaigners are hoping that a significant boycott of the nationality questions will bring an end to the policy.

Martha Spurrier, Director of Liberty, said:
“It shouldn’t have fallen to campaigners to inform schools and parents about their right to refuse to give this information – but the Department for Education wasn’t going to step up.

“Parents and guardians deserve to know they do not need to be complicit in this Government’s ‘foreign children list’ experiment, which uses children’s education to enforce border controls. If enough of them take a stand, we can make the playground off-limits to border police, defend every child’s right to education and begin to reunite our communities.”

On Saturday 14th January, at the inaugural Against Borders for Children Conference,

“We shouldn’t have to do the government’s job for them, but we hope our joint letter will make it clear to all schools that parents and guardians have the right to refuse handing over their children’s nationality data to the government, and can retract data they have already submitted.

In December, ABC published 30 examples of school nationality forms that failed to inform parents that the new nationality questions are optional. The way the census has been conducted so far has produced some discriminatory and outright racist outcomes. As hate crimes soar and the status of EU migrants remains precarious, schools should be a place where all children feel safe.”

Here are some Frequently Asked Questions that we have produced for our upcoming conference.

You can download a Word document of this and the rest of the conference pack from the Resources page.

The School Census takes place every academic term, so three times a year. This academic year the census dates were/are 6 October 2016, 19 January 2017 and 18 May 2017. It is statutory data collection on individual pupils and the schools themselves. It is done for all schools that receive government funding.

Personal individual information on each child, including name and home address, sensitive confidential personal data like special needs, and reasons for exclusions including drug and alcohol use or sexual misconduct, national curriculum attainment levels, exam grades, and educational progress.

Since 2008, there has been a widening of information requested. Not all of this information has value for children’s education. Our campaign is specifically concerned about the new requirements for nationality/country of birth (COB) data in the 2016/17 census.

In 2015 then-Home Secretary Theresa May outlined proposals to be included in the Immigration Bill that would bring schools under the government’s agenda to create a ‘hostile environment’ for migrants. According to the BBC, those plans included schools withdrawing places offered to children of irregular migrant families and checking immigration status before accepting new pupils. After the then-Education Secretary Nicky Morgan expressed ‘profound concerns’, they reached a compromise, and the DfE agreed instead to collect nationality, COB and and expanded language data through schools “to improve [the DfE’s] understanding of the scale and impact of pupil migration on the education sector.” The new data collection is explicitly linked to the government’s policy to create a hostile environment for migrants, and is part of an attempt to make schools a proxy for immigration enforcement.

The nationality/COB questions have nothing to do with school funding. There are no repercussions for refusing to answer these questions and it is the right of all parents/legal guardians. That there is no sanction for refusing to answer was confirmed in the House of Lords on Wednesday October 12 2016, and by DfE representatives on 16 November 2016.

English as an additional language (EAL) data is already collected by teachers in the classroom. The new nationality/COB questions are not used to determine EAL or funding needs.

Yes. Pages 61 and 66-67 of the DfE’s School Census guidelines explain that schools can record that a child’s immigration data is either “not yet obtained”, “not known”, or has been “refused”.

Yes. If you respond ‘refused’ to the nationality/COB questions in the Spring Census which is due January 19 2017, this response will overwrite any previous response that has been given. Even if your school has not previously asked for nationality/COB data we would encourage you to write to retract it in case the school used information it held on file to fill in the October Census without informing you.

What difference does it make if I refuse to answer the nationality/COB questions?

The DfE has told us that if there are high rates of refused/not yet obtained responses in the January Census, it will not be able to use the data that it does manage to collect for its intended purpose, and will have grounds to stop collecting the data entirely.

Schools are under a statutory obligation to ask for pupils’ nationality/COB and must submit data that they obtain. However, some schools have recorded ‘not yet obtained’ for all pupils as default in response to the new nationality/COB questions, and have informed parents of their choice to provide nationality/COB data if they wish to do so. Schools still meet their statutory requirements to the DfE by doing this.

No. DfE guidance specifically states at pages 66-67 that passports and birth certificates must not be requested. However, many schools have erroneously asked to see ID documents.

This is inadvisable even for older children as they may not fully understand the implications of providing it. Although we have received numerous reports of schools asking children for their nationality/COB directly, schools should ask parents/guardians for the data rather than children themselves.

No. If schools plan to use data they already hold for purposes other than those for which it was first collected, they must seek consent from a child’s parent/guardian first.  If you are concerned that your child’s school has used data without informing you, please email hello@schoolsabc.net.

Nationality/COB data is not currently available to the Home Office, but would have been had the DfE not changed its data-sharing policy on 7 October 2016after we wrote an open letter expressing precisely that fear. However, nationality/COB data is still being collected as part of the government’s attempt to create a hostile environment for migrants, and future changes in the data-sharing agreement could see nationality data made available to the Home Office once again. It may still be used within the DfE and there is no transparent oversight or any safeguard in place.

Yes. The DfE has an agreement with the Home Office, in place since 2015, that it will share the data of up to 1500 children a month, including name, address and school details, for immigration enforcement purposes. This is an agreement to track down migrant children and families using school records that was kept secret from parents, the press and the public until it was released in December 2016 under the Freedom of Information Act.

Here’s a campaign summary that we have produced for our upcoming conference.

You can download the pdf of this and the rest of the conference pack from the Resources page.

Against Borders for Children started in August 2016 and we are a coalition of parents, teachers, schools, NGOs and campaigners.

Our aim this year is to reverse the Department of Education’s (DfE) policy, effective from September 2016, to collect country of birth and nationality information on 8 million children aged between 2 and 19 in England in order to extend the government’s hostile environment agenda to schools and migrant children.

In September we organised and launched a national boycott of the country of birth and nationality questions, which will continue until the Department of Education reverses this policy. We also called on the DfE to commit to safeguarding children from the stigma of anti-immigrant rhetoric and the violence that accompanies it. In November 2016, we won a concession from the DfE which removed pre-school children (under 5s) from the foreign children database.

The Guardian reports that DfE officials have an agreement, since June 2015, to share the personal data of up to 1,500 schoolchildren a month with the Home Office. In 2015, as Home Secretary, Theresa May wanted schools to check children’s immigration status prior to enrolment, and proposed ‘deprioritising’ the children of irregular migrants for school places. Although that policy was not taken forward, this data-sharing agreement was the compromise she struck with the DfE.

According to the DfE’s own guidelines, providing this data is optional and does not affect school funding. By the DfE’s own admission, if large numbers of parents refuse to answer the new questions in the January and May censuses, the data collected will be useless and they may be forced to scrap the data collection entirely.

This means parents and schools can legally work together to stop this information going to DfE and the Home Office. If a significant minority continue the boycott then this policy will fall. #BoycottSchoolCensus 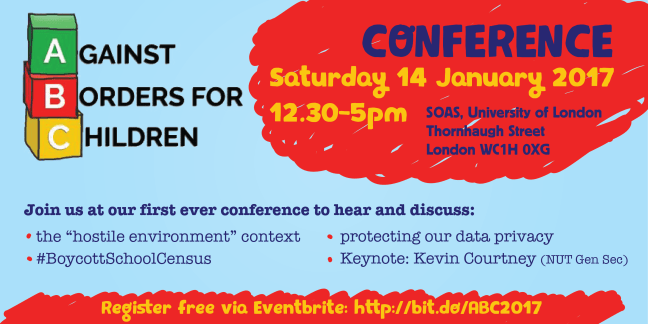 Parents, teachers, everyone: join the Against Borders for Children campaign in the New Year for our first ever public meeting!
*Find out how we’ve managed to make it this far and what we’ve achieved;
*Learn more about the campaign in the context of the ‘hostile environment’ for migrants and disappearing data privacy rights;
*Help us imagine what conversations about race and migration in the classroom might look like in the future; and
*Find out how you can be involved with upcoming actions!

The keynote will be given by Kevin Courtney, General Secretary of the NUT.

The event is free but due to limited seating capacity, prior registration via the EventBrite page is recommended. 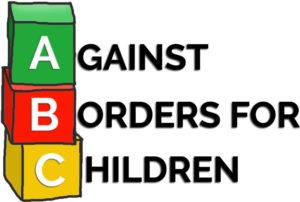