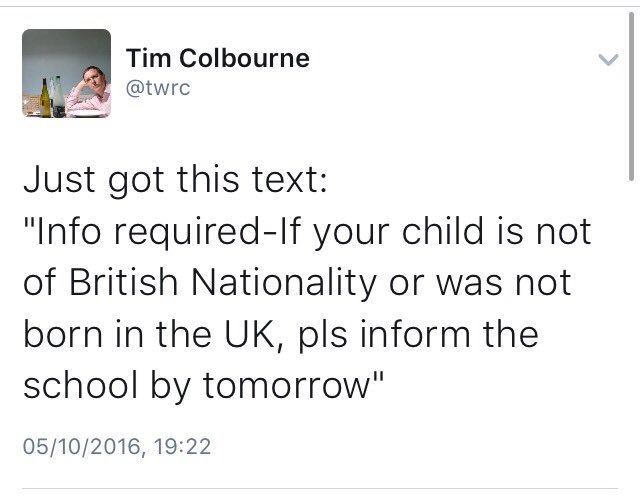 Against Borders for Children is calling today a Day of Action to protect immigrant children in England.

For the first time ever, the school census includes immigration data, i.e. country of birth and nationality of pupils in Primary and Secondary Education and young people in sixth forms attached to a secondary school.

Schools are asking parents to send this data in but parents have a right to refuse providing this information. However some schools are not making this right clear to parents.

Against Borders for Children has already taken action by sending a letter to Justine Greening with over 20 other organisations. Now we are asking everyone in the UK but especially in England to contact their political representatives to raise concerns about this new policy and the manner that some of this data has been collected.

Please take 5 minutes today to email and/or call your local councillor, your local MP and even your school board of governors.

If calling your MP, you can use the following text:

I am a constituent of yours and I am concerned about the new nationality and country of birth questions on the Department for Education’s School Census.

I have heard in the press that schools have been asking parents with foreign sounding names to bring in their passports and non-white British children asked to hand in their birth certificates.

The National Pupil Database will permanently store this information and it will be accessible at an individual level for other government departments including the Home Office that recently announced it wants to publish lists of firms that hire foreign workers. I worry that a future policy will be to make public all the schools with large numbers of foreign pupils.

I would like you to ask the Schools Minister to withdraw this policy and delete country of birth and nationality data from the National Pupil Database and also remove these questions from the Early Years and Schools Censuses.

Please also email your local MP and copy us in at hello@schoolsabc.net also send us any responses you get!

Get involved and look at our resources page.