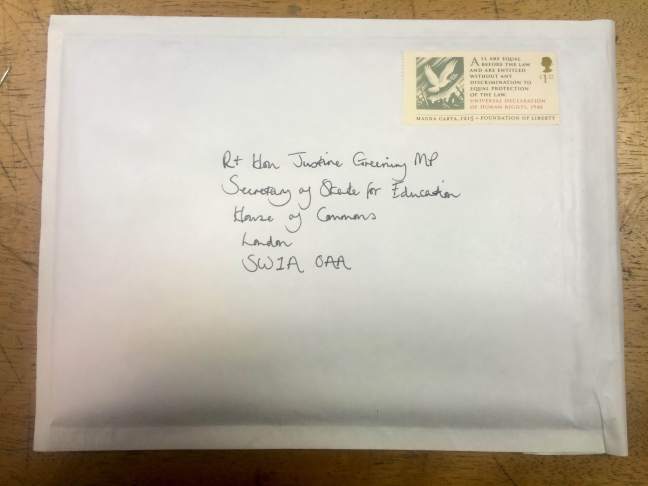 Today as reported in The Guardian, over 20 leading organisations including Liberty, the Refugee Council, the Institute of Race Relations and the Latin American Women’s Rights Service have written to the Secretary of State for Education, Justine Greening to oppose the child migrant census policy.  The letter is in support of the Against Borders for Children (ABC) campaign, launched earlier this month to overturn a new policy which seeks to collect immigration data on every child aged between 2 and 19 in England. See our letter here.

The policy has been in effect from the start of term and caused some confusion as some schools have unlawfully asked parents of non-white British children to bring in passports and birth certificates. Like ABC, the organisations who have co-signed the letter are concerned that this data could be used in future by immigration enforcement against individual children and families. The campaign is urging parents to refuse to take part, as they are legally entitled to do, as part of a national boycott.

The Department for Education (DfE) has explicitly linked this policy to immigration in the past, saying it is “to assess and monitor the scale and impact immigration may be having on the schools sector”. In 2013,

Gracie Mae Bradley, from Against Borders for Children, said:

“It’s inspiring to see so many of this country’s leading organisations with an interest in migrants’ rights come on board with this campaign. The pressure is now really on the Secretary of State to change her mind and abandon this risky and unnecessary policy.

“School should be a place where all children are treated equally. In the context of a ‘hostile environment’ in which employers, landlords and even healthcare workers are being turned into border guards, we believe this new requirement could be used to add school administrators to the list. We are also deeply concerned that this data will be made available (without time limit) much more widely outside the schools system, which cannot be acceptable.

“Over the coming weeks we expect the organisations opposing this divisive approach to be joined by many more, and for parents and schools to join the boycott and protect young people from this dangerous threat to their privacy.”

Don Flynn of the Migrants’ Rights Network, a signatory to the letter, said:

“This proposal risks all the vital work that teachers have been doing to promote trust between schools and the parents of migrant pupils.  A decade of real advance in the schools which serve migrant communities will be placed in jeopardy if it seems that education is being compromised by an agenda driven by immigration enforcement priorities.

“People in migrant communities across the UK have been thrown into great uncertainty about their future as a result of the Brexit vote and the harsher tone of the public debate.  The DfE should not be adding to this anxiety by introducing a measure which will inevitably increase the sense of being watched and scrutinised by state agencies with a view to future deportations.”

“No child is illegal. There should be a clear dividing line between access to education and immigration control. School’s recent requests for data on nationality and country of origin is already leading to the discrimination of children from ethnic minority and migrant backgrounds. This is unacceptable. Children should not be targeted on the grounds of their race, colour or nationality and teachers should not be placed in a position of “de facto” immigration control officers. The provision of this data is not reasonably justified or required by legislation.”