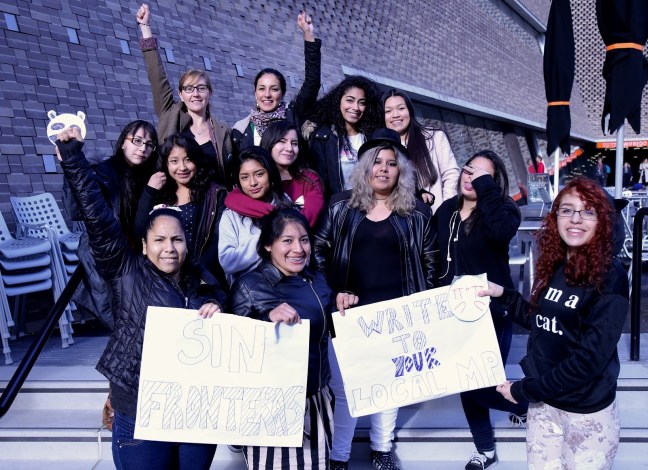 Last weekend, ABC met with a group of young women and girls from Sin Fronteras – a youth project that is part of the Latin American Womens Rights Service – to talk to them about the campaign, and the upcoming debate in the House of Lords.  The talk came during a workshop in which the group were creating a zine on equal rights in education, including information to raise awareness of the new DfE policy.

Members of the group spoke about their experiences with the new country of birth and nationality data collection, with some being shocked when they discovered they actually had the right to refuse this information.

“I got a letter from school asking for my nationality and country of birth – it didn’t say that we can refuse, we thought it was obligatory”.

All expressed their dismay at the data collection and its link to immigration, particularly given that the Home Office and the police have been granted access to the National Pupil Database (NPD) on numerous occasions over the past 4 years.  They voiced anxiety at what the policy could mean for those whose families are undocumented, and also at how this data collection might link to Brexit, for those with non-British passports.  Even with the assurance that their families would face no sanctions if they refused to provide this data, group members worried that such refusal could in itself mark them out from their British counterparts:

“If we say ‘refused’ on the form, could they not use that to know we are undocumented?”.

This is why we called on British parents and children to also support the boycott –  no group should be singled out by their rejection of this policy, nor should the fight against it fall only on the shoulders of those it most directly affects.

It is difficult to offer sufficient reassurances with such a discriminatory policy causing real fear and anxiety for young people and their families.  The first School census day (6th October) to include this data happened in the same week the Home Secretary announced the policy for companies to report the number of foreign national employees.  While the government have since declared that these lists will not be made public, they will still be constructed, and secretly held by the government for future planning.

It was also revealed today that in the last 14 months, the Home Office has asked the Department for Education for access to the school records of almost 2500 children, including for immigration enforcement purposes. Such a hostile environment makes it easily apparent that we must do all we can to have this policy repealed.  The group expressed determination to fight for the rejection of this policy, and persuade others around them to do the same.

“Now we are conscious that we, as migrant youth, can refuse to give this information and oppose this legislation that will affect the opportunity we have to educate ourselves freely. As young Latin Americans living in London, we believe that we have the same right to education and that it shouldn’t be a privilege of citizenship or migrant status.”

The group urged everyone to contact members of the House of Lords ahead of the debate on 31 October, writing to a Lord they already know; the Lord Watson, Labour’s Education Spokesperson in the House, or even on Twitter at @LabourLordsUK & @LibDemLords using #EducationNotDeportation and #BoycottSchoolCensus.

The debate will be a chance for Peers to vote to show that they want the policy to be scrapped. Having them understand the depth of worry over the policy can help to persuade them to make this happen.  So many have expressed their outrage and disbelief at this policy, and by expressing yours, you still have time to make a tangible difference.